Someone planted new trees in the Joburg CBD last night after a billboard company decided to chop the old ones down to make their advert more visible.

Johannesburg, South Africa – A billboard and the brand being advertised on it have both found themselves in hot water with Joburg residents after trees along Main Street in Maboneng were hacked to clear a line of sight to promote the “timeless taste of Amstel”.

The trees, which provided much-needed shade and greenery to the inner city were almost non-existent after being “pruned” a few weeks ago.

Amstel, who only purchased a rental of the billboard, has since asked for the advertisement to be taken down and has agreed to plant 50 trees in the inner-city over the next two weeks but Joburgers are all about getting things done now, and a beautiful row of trees popped up along Main Street last night. 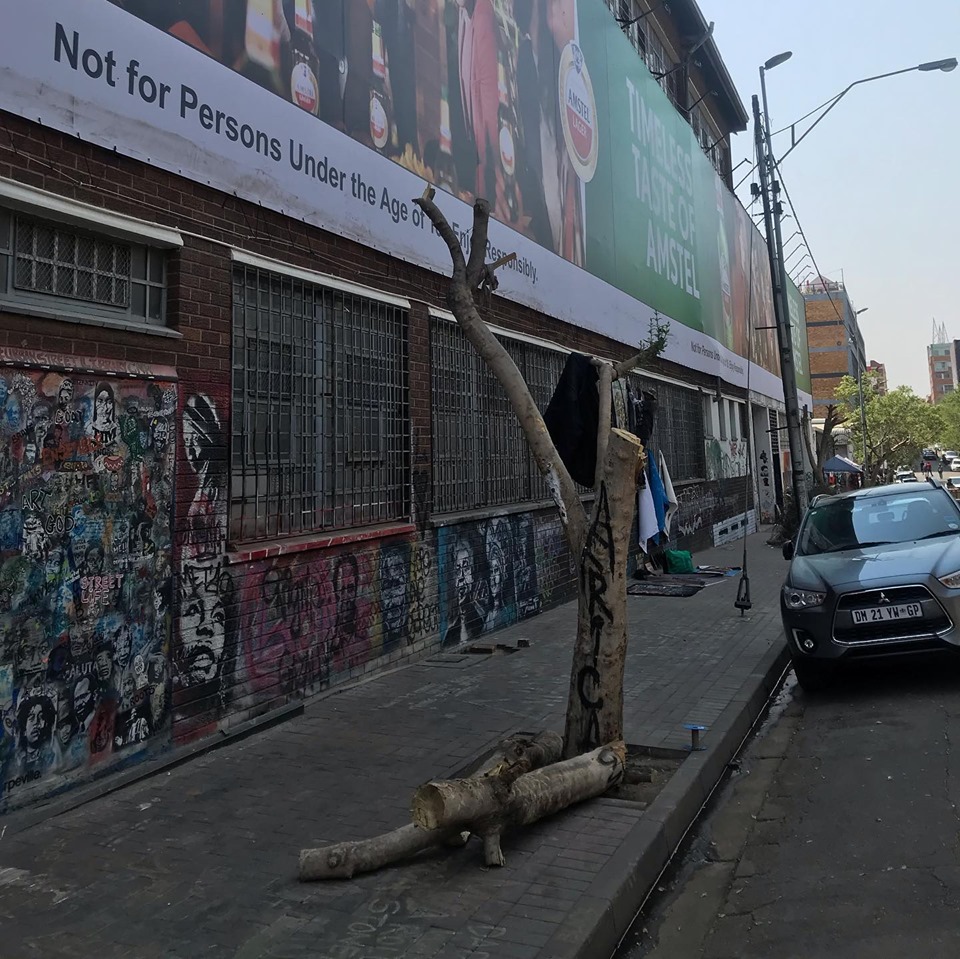 Jo Buitendach from Past Experiences – an inner-city walking tour company – found out what had happened to the trees on the 21st of September 2019 and decided on to write an open letter to both Amstel and the Billboard company which she posted to her social media.

“Another giant alcohol advert? How can you make it even worse? Maybe chop down all the trees in Main Street in Maboneng so you can see the advert.

I realize the city has many issues and this definitely isn’t our biggest, but there are so few trees in the city, the suburbs are full of them but not the Inner city. The street looks so sparse and even more importantly, all the daily street traders have no shade now.

I’m not sure who is directly to blame? Amstel, the building owner, the advertising company but ultimately it’s Amstels name up high… can you not be kinder, less evasive more community-minded? Just because you bought the space and you can, doesn’t mean you should!! The Maboneng community are mortified.”

Her open letter quickly gained traction and Joburgers started voicing their disgust in the decision to hack the trees.

Neo Merafi, a publicist for Xtra Space, replied to Buitendach on Twitter to explain that the trees had only been “pruned”.

“This message serves to clarify that the trees in question that are located in Maboneng Precinct were not harmed in any way but rather pruned because they were overgrown and to give better visibility to the billboard.

Please note further that Amstel SA had no involvement in the maintenance of this media space including the pruning of the trees in question, it is solely the responsibility of us as Xtra Space, the property owners and QCapital the media owners.

As a company that prides itself in supporting youth development, work opportunities and eco-friendly buildings, we would never intentionally harm the communities in which we operate.”

Although Buitendach appreciated the response, she felt that the trees had actually been over-pruned, which could cause them to die.

“I must say though; this does not look just like pruning. I have done some research on pruning, over-pruning and topping a tree and I think that this is definitely very harmful to the trees if they even survive.”

Two weeks after her open letter went viral, Amstel sent out a press response committing to making the inner-city greener.

“In response to the social media complaint, Amstel has committed to greening Johannesburg through a partnership with Food and Trees for Africa, an organisation that focuses on urban greening and various environmental undertakings.

Amstel has also instructed the advertisement to be removed with immediate effect.

Through its partnership with Food and Trees for Africa, Amstel will plant 50 trees in Johannesburg over the next two weeks. The complaint arose when trees were excessively pruned to make way for the brand’s advertisement. This  was done without the brand’s knowledge or approval.”

But someone beat them to it and started the greening process late last night!

When Maboneng started waking up this morning, a beautiful row of trees could be seen along Main Street where the old ones used to be.

No one has taken credit for the good deed, but they have left a hashtag on each tree, simply saying “Protect Paradise” leaving many social media users wondering if Corona – a competitor beer brand – was behind the new trees?

“In 2017, Corona and Parley rallied together to put an end to marine pollution globally. They called it: Protect Paradise. The concept they created was to protect 100 islands from marine plastic pollution and this year; they have joined forces with thousands of other like-minded people to organise clean-ups along coastlines everywhere.”

We don’t know who actually planted the new trees, but we would like to collectively thank Jo Buitendach for standing up for our environment, and we might be raising a Corona for whoever is helping keep our inner-city a little greener. 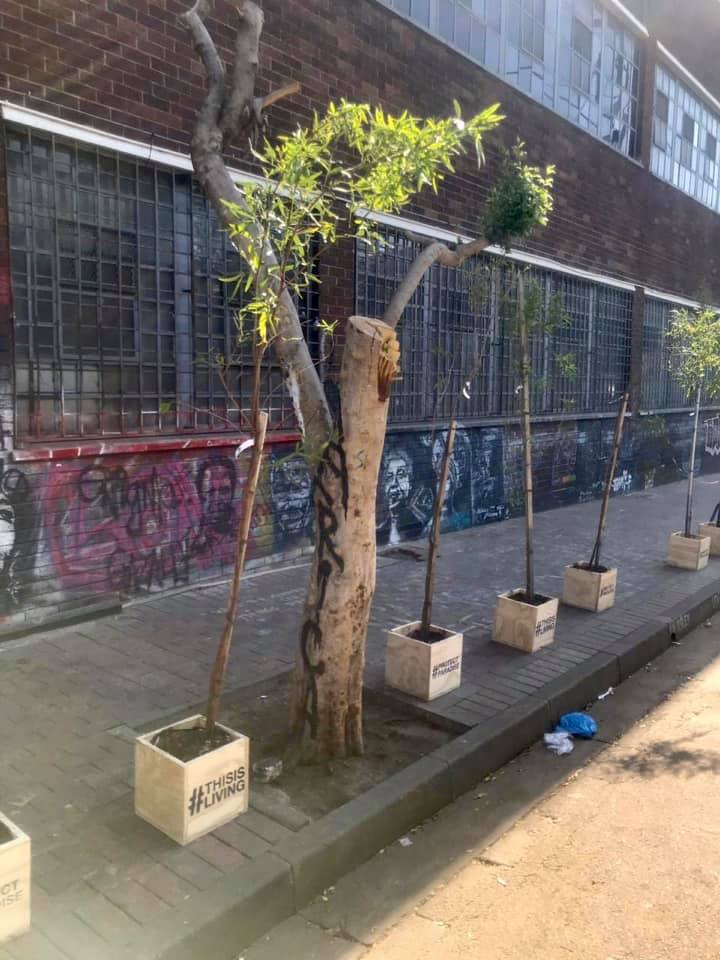 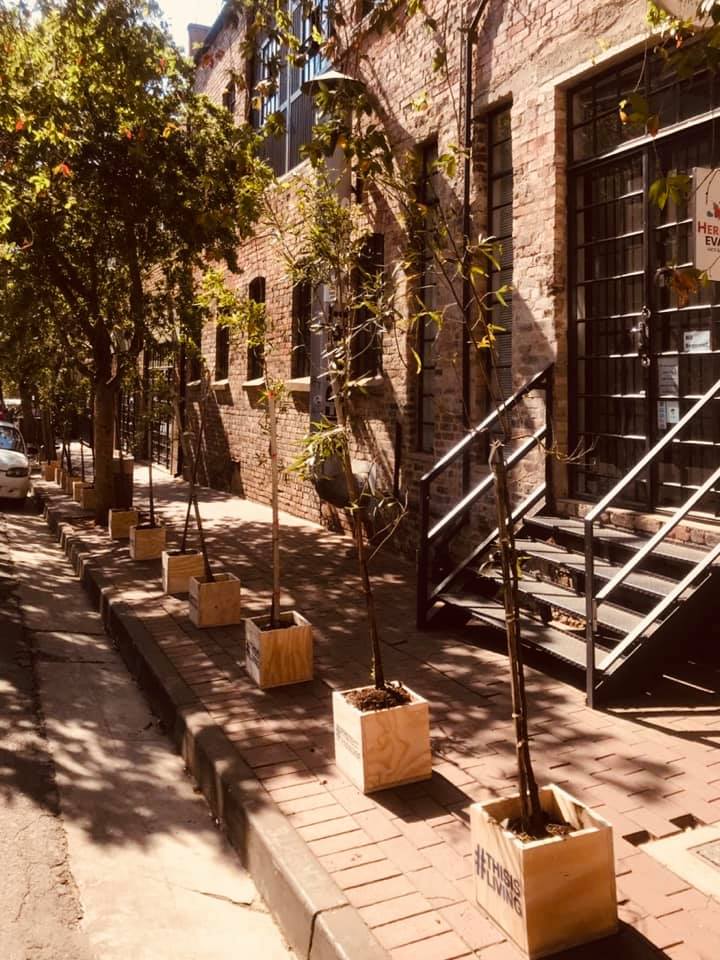