A curry house in Edmonton, Canada, is offering free food to those in need.

The restaurant is encouraging anyone unable to pay for their meal to come inside and eat with them by sticking a sign to the back door of the restaurant, which reads:

Dear friends, If you are hungry and have no money to pay, just ring the bell below or come in for a free meal box/coffee anytime.

They are even being courteous of dietary needs, by offering both vegetarian and non-vegetarian foods, and asking those who may be using the restaurant under these circumstances to bring information of any ‘allergy or dietary concerns’ to their server’s attention.

Describing the restaurant as being fortunate enough to always have more than enough food, they said they felt they should be doing something worthwhile with the excess.

They don’t want visitors to just come in and grab a quick meal box either. Though it’s not expected of them, the offer means they are more than welcome to come in and dine in the restaurant just like any other customer. 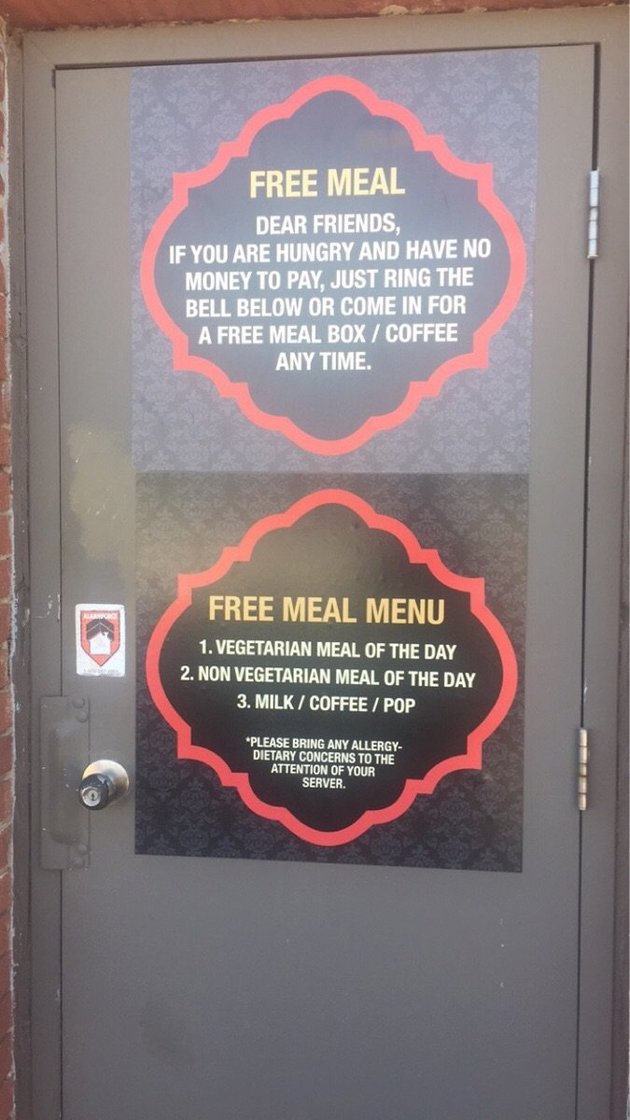 In a video interview with CTV News Edmonton, the owner of Indian Fusion told of how he came up with his generous idea:

‘I thought, how many people can I go and ask: “Are you hungry?” It’s not possible,’ he said. ‘So I thought, why not put up a sign? In case someone is hungry.’

He is convinced he is not giving ‘anything extra’ by cooking and giving away additional food – and he is already preparing to give more. He said:

‘I’m feeling sad, I think that I can do much more. I am already preparing food for other people. I am not going out of my way – this is my way of life. I am not doing anything extra.’

However, plenty of people have begged to differ. Over a million, in fact.

A picture of the sign was posted to Imgur last night and, after receiving over a million views, the restaurant has received an overwhelming response, with people from all over the world commenting on the restaurants Facebook page and thanking them for their generosity.