The human faces behind those statistics show just how dire the situation has become. Graduates have taken to street corners begging for work, their resumes and degree certificates often in their backpacks. Ready for any opportunity.

They’re not the only ones.

It’s a common scene to see a group of tradesman sitting on the sidewalk near mega hardware stores. Shopping their skills—painter, plumber, tiler—in the hope that someone will hire them.

There are no easy solutions to South Africa’s unemployment challenge. Policy and education experiments have failed. In the first quarter of 2016, unemployment increased to 26.7%, a 2.2 percentage increase since the end of last year.

The economic inequality created by apartheid has proven too wide a gap even for skills and education to bridge.

“Apartheid ended 20 years ago but the reality is that inequality remains one of the biggest problems in South Africa,” said Anish Shivdasani. Shafin Anwarsha, his co-founder originally from Botswana, agrees.

They’ve created Giraffe, a mobile job recruitment site that aims to give jobseekers access to the workplace through their phones. Anwarsha is quick to point out that Giraffe is not an app, but a mobisite.

It’s a cost-effective user-friendly site, giving jobseekers who don’t have a smartphone access to the service with a feature phone. And it’s specifically aimed at low-income workers. 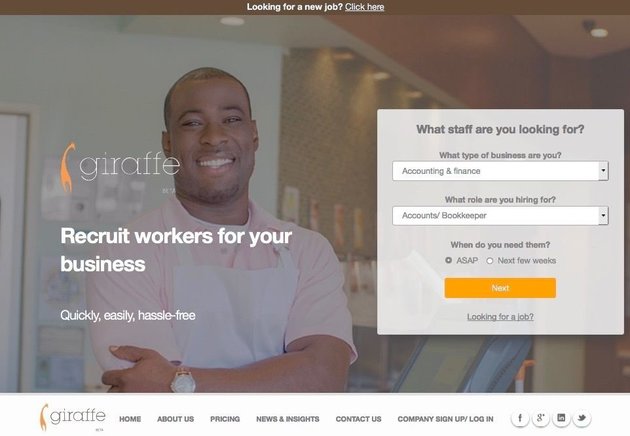 Shivdasani and Anwarsha travelled to the city’s formerly segregated townships on the outskirts of the city, where the impact of unemployment is hardest felt, before hiring a developer. They spoke to young jobseekers who’d lost faith in their high school diploma and then returned to northern office parks to speak to prospective employers.

Looking for a job, users fill in their details selecting predetermined options that influenced by the user’s previous answers. Giraffe’s algorithm combs its database of users for the perfect candidates based on distance, experience and suitability.

Giraffe’s “guts,” explains Anwarsha is in its promise to deliver a row of suitable candidates, ready to interview.

Prospective employers fill in a similar form about the kind of employee they need, including the interview time and location. An SMS informs a prospective candidate when and where the interview will be, and even provides a tip like “Don’t be late,” or “Dress appropriately.”

Since launching in February 2015, Giraffe’s attracted 100,000 users and has a successful placement rate of 70%.

The service is made free for jobseekers, as employers are charged.

Access is the site’s driving strategy. So much so that they’ve partnered with Facebook’s FreeBasics mobile network partner in South Africa, Cell C, to provide free access. They’ve also just announced a partnership with South Africa’s largest telecommunications network, Vodacom, to provide access to the site at a zero rate. 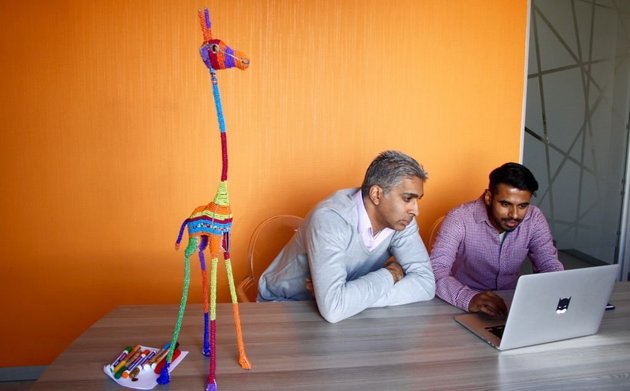 Within five months of the launch of the beta site, Giraffe’s quickly earned reputation began attracting investors. While Shivdasani and Anwarsha had invested enough of their own money to keep the lights on for at least a year… investor interest was a sign that they were on the right track.

Their first external capital injection came from the Global Seed Stars competition, where their pitch saw them win $50,000.

“Among other competitors in the competition, Giraffe had the most socioeconomically relevant and practical innovation that would contribute towards South Africa’s job creation problem,” said Matsi Modise, a judge at the competition who also runs entrepreneurship support firm Simodisa.

It was this socioeconomic goal that also impressed impact investor, the Omidyar Network, earlier this year when it announced it would be backing Giraffe for an undisclosed amount, leading the first round of investing. The funding will help them hire developers to evolve their technology and expand the site’s service.

This month, Giraffe expanded to Cape Town and Durban.

Giraffe’s noble intentions may present a problem though.

“The target market Giraffe has identified isn’t that rich, so it really has to grow. Both in South Africa and internationally—to make serious revenues,” said Tom Jackson of industry news site Disrupt Africa.

“It has proven it works small-scale, now it has to work on a larger scale.”